Cats have a bad reputation for not being trainable. The fact is, cats can be trained, but they have different motivations than dogs.

While dogs respond positively to the reward of a favorite ball, a scratch behind the ears, or a verbal “good boy,” most cats are more motivated by food. The good news is that positive reinforcement can help teach your cat many positive behaviors, from using the litter box and scratching post to doing tricks.

Check out this video for cat guru Jackson Galaxy’s thoughts on the best and worst ways to train your cat.

The Humane Society of the United States (HSUS) recognizes that punishing cats for bad behavior is, at best, ineffective and, at worst, harmful to your relationship with your cat. According to their website:

“You may be tempted to scold your cat when you catch him sitting next to a broken vase or scratching furniture, but punishing your cat after the fact is ineffective. She won’t connect the punishment to something she’s already done and forgotten. Instead, he’ll think you’re yelling at him for what he’s doing, which is bringing him home from work. Yelling, hitting, and shaking will only make your cat anxious and confused and may cause him to avoid you completely.”

What is positive reinforcement and how do you use it to teach your cat what to do? Simply put, it’s using treats to reward your cat for good behavior. If your cat learns that when she completes a certain task, she tastes her favorite treat, she will be more likely to repeat that task to get more treats. 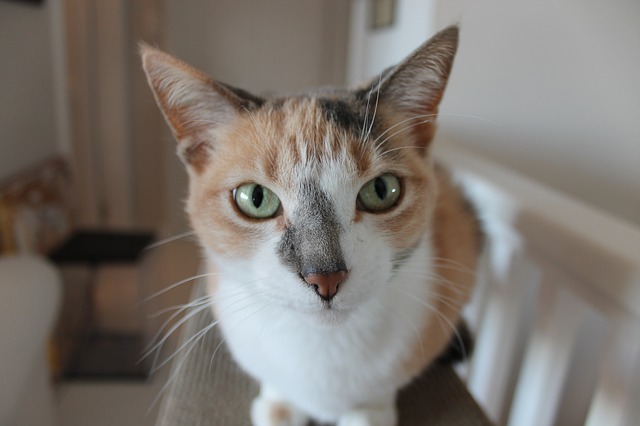 The key is to reward your cat IMMEDIATELY after a positive behavior, otherwise, she won’t understand that the reward she’s receiving is related to the behavior she just performed. One way to reduce the time between performing the behavior and receiving the treatment is to use a clicker (which can be purchased inexpensively at most pet stores). Teach your cat that the sound of the clicker means he is about to receive a treat. Then click when your cat does the right thing, followed a few seconds later by a reward.

The best time to train your cat is just before a meal when she’s almost ready to work for a treat. Keep training sessions short, as cats can get bored after more than 10 to 15 minutes of training. To prevent your cat from becoming overweight, you can ensure that she receives more praise and affection as a reward for positive behavior, instead of treats. Once you’ve stopped giving your cat treats every time she performs the desired behavior, you must continue to use the treats as rewards instead of giving them for free, or you risk turning your cat into a beggar.